American Consequences: How Politicians Might Screw Up US Elections

Don't Count on U.S. Elections as Normal
By Kim Iskyan 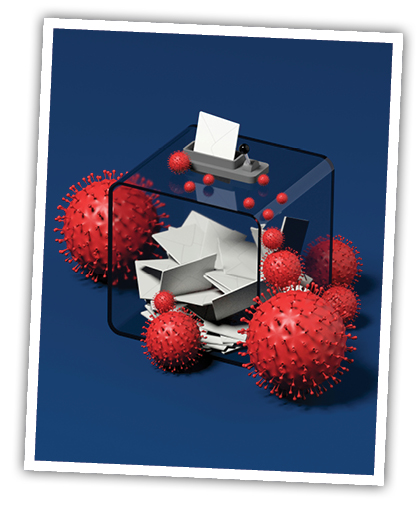 Everything is canceled...
The school year, my Easter trip to the Maldives, primary elections in Maryland and Kentucky, March Madness... within just a few weeks, COVID-19 has canceled or postponed more events than a century's worth of natural disasters.
In this time of chaos – featuring multitrillion-dollar stimulus packages, daily death counts, and makeshift hospitals in New York's Central Park – normalcy is gone.
And that's true for the upcoming U.S. presidential elections in November, too.
"Could the 2020 Election Be Postponed?" asked a headline from the New York Times on March 14. "Can Trump Use Coronavirus to Delay 2020 Election?" asked think tank Heritage Foundation. "How Donald Trump Could Steal the Election," explained an article on Sunday in The Atlantic.
Maybe COVID-19 will be a fuzzy bad memory by November, like '80s hairstyles and wide ties. But that's likely wishful thinking...
Already, there are more than 200,000 cases in the U.S. – more than double the number from last week. Entire public hospital systems have emptied out to make space for coronavirus patients. And the "second wave" experience of Singapore and other countries in Asia suggests that COVID-19 will be widespread in the U.S. for months to come.
Even though toilet paper is a bigger talking point than the primaries right now, politics still matter. And you can bet that politicians in both the Democrat and Republican parties are looking to exploit COVID-19 for a political advantage.
It's clear that constitutionally – pandemic or not – the U.S. president can't fiddle with presidential elections. As the Heritage Foundation explains: "Under our Constitution, the executive branch has no authority whatsoever to delay, reschedule, or otherwise change the federal election in November." Martial law or a state of emergency couldn't override that.
Only Congress could, in theory, name a new date for elections. But Nancy Pelosi and company in the Democratic-controlled House of Representatives aren't likely to let anything stand in the way of (they hope) the White House door hitting Donald Trump on his way out.
So what other ways might politicians attempt to do the hokey pokey with the American presidential election...
The president is chosen not by the popular vote, but by the Electoral College – made up of 538 electors from the 50 states. Those electors are assigned to the candidate that won the state's popular vote. So if a state has 23 electoral votes, the 23 electors from that state are supposed to vote for the candidate who wins the popular vote in that state.
But there's a Mack truck-sized loophole in this that allows state legislatures to short-circuit the system. Slate explains...

Right now, the Republican party controls 28 of the 50 state legislatures and the Democratic party controls 22. So could a few dozen state legislatures – in either party – decide to ignore the election results in their states and simply assign their electors to either President Trump or the Democratic nominee?
It would defy democracy in a brand-new and breathtaking way – but again, these aren't normal times.
In addition, coronavirus lockdowns, stay-at-home measures, and quarantines could be colored a shade of purple by politics. State officials could issue a "shelter in place" order in certain counties – the Republicans might do so in urban areas of closely contested battleground states... or the Democrats might do so in rural areas, under the guise of public safety.
Sound unlikely? Well, it happened in Ohio two weeks ago. CNN explains:

"Gov. Mike DeWine asked the state's Supreme Court on Monday [March 16] to postpone Tuesday's primary election in Ohio until June. The court said no. So DeWine – and the state's top election official – ordered that polling places be closed. And so, the primary didn't happen."

Going old-school by shifting to mail-in paper ballots or high-tech with e-voting would reduce the health risk of voters cycling through polling stations. But paper would be a logistical nightmare, and the disaster of leveraging technology in the Iowa Democratic primary doesn't bode well for voting online. Both would create new risks, as detailed by political risk consultancy Eurasia Group...

"If states turn to the mail, can it be done securely, will it structurally favor one side, and will that tempt one or both candidates to undermine its credibility? If the US goes to e-voting, nefarious actors will see greater opportunity to disrupt the process. Even without malign interference, all it would take is a technical glitch to call the results into question."